The Boeing 747 has been a familiar sight in our skies since it was first flown commercially back in 1970. It was the first ‘wide-body’ commercial airliner ever made, with both an upper and a lower passenger deck that made the plane a passenger capacity record holder for a staggering thirty seven years before the mantle was passed to the colossal Airbus A380 – a seventy two foot long behemoth weighing in at just over 600,000 pounds. 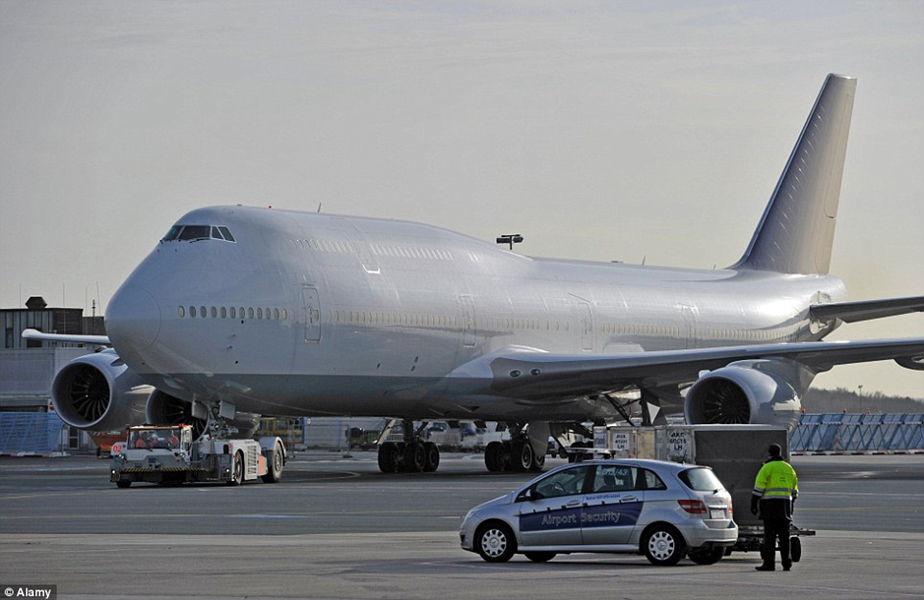 The Boeing 747 (pictured above) may not be the biggest any more, but that doesn’t mean it hasn’t got a few tricks left up its sleeve. Especially if it’s owned by a reclusive billionaire who’s just spent $500m pimping one out in the most lavish way imaginable. Seriously, this baby has to be seen to be believed!

Below is a schematic of the plane’s layout. Fitters decking out the plane used this plan to completely remodel the jet from nose to tail:

This is the lounge area, where the billionaire and his guests can relax and watch shows on the TV. We don’t know what billionaires like to watch, but we imagine its shows about money and golf and ski resorts and stuff. 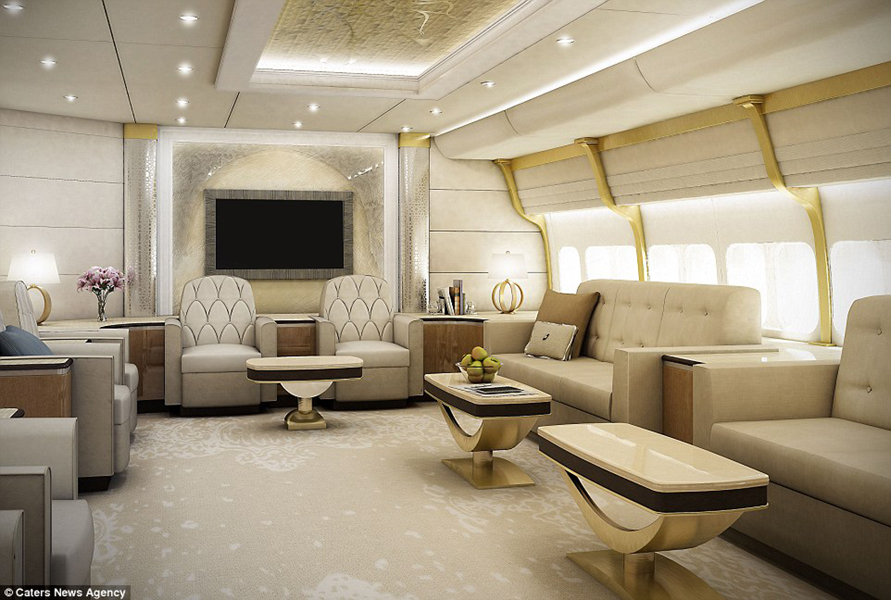 Below we have a view of the stateroom. Here the billionaire can unwind after a busy day billionairing. No doubt he’ll unwind with a group of supermodels, a box of the finest Cuban cigars and gallons of champagne. 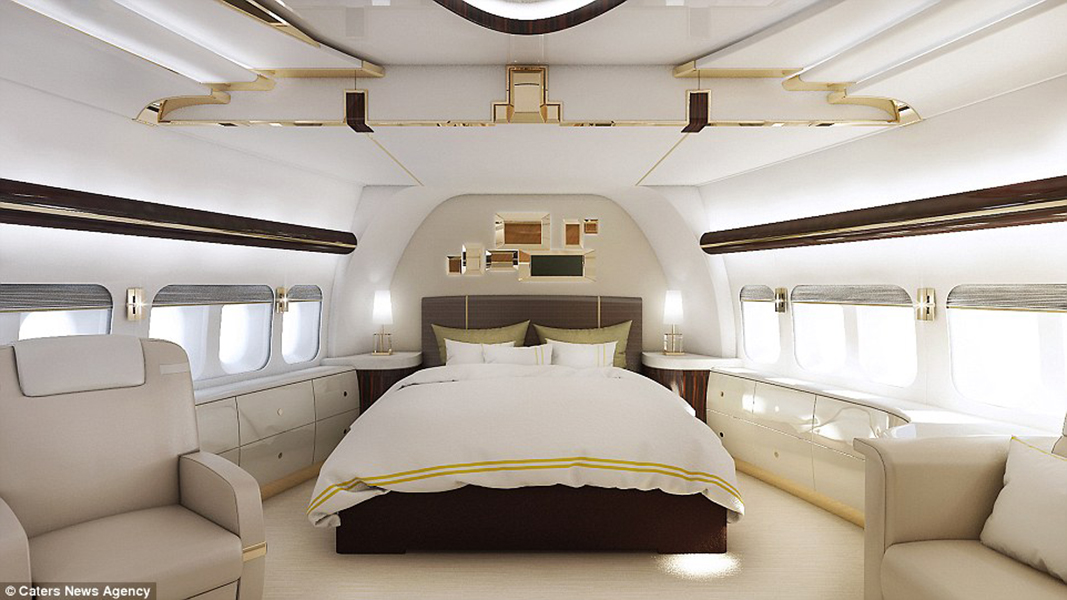 Here we have a view of the conference room, where the billionaire and his business associates can plot how to turn their billions into trillions and, if James Bond movies are to be believed, plot to take over the world: 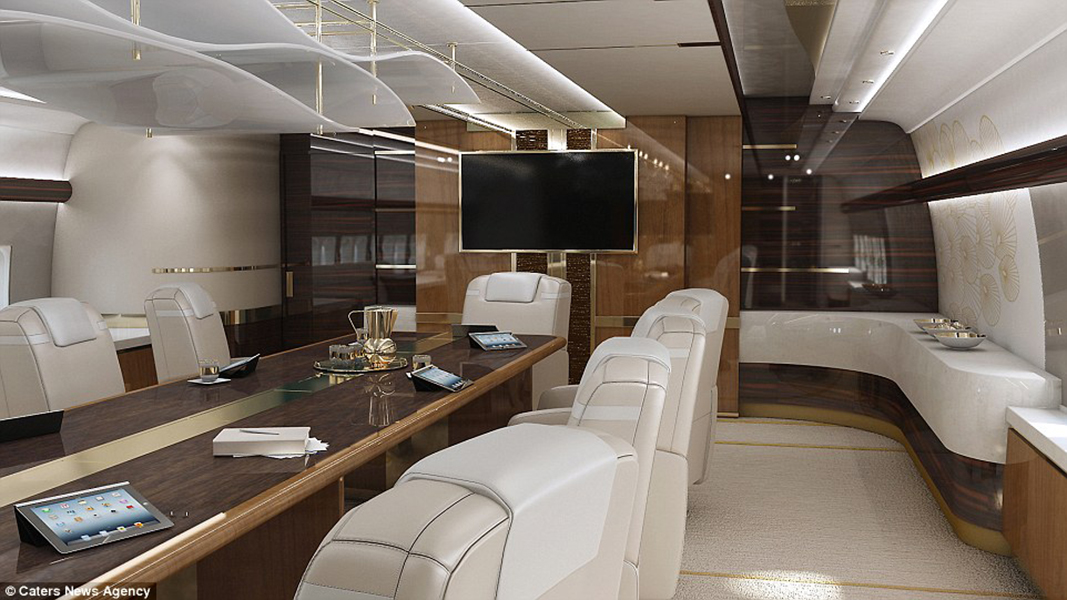 This is the lounge outside the captain’s cabin. Not bad for when you need to take a break from flying a billionaire around. Let the co-pilot take the strain for a while. 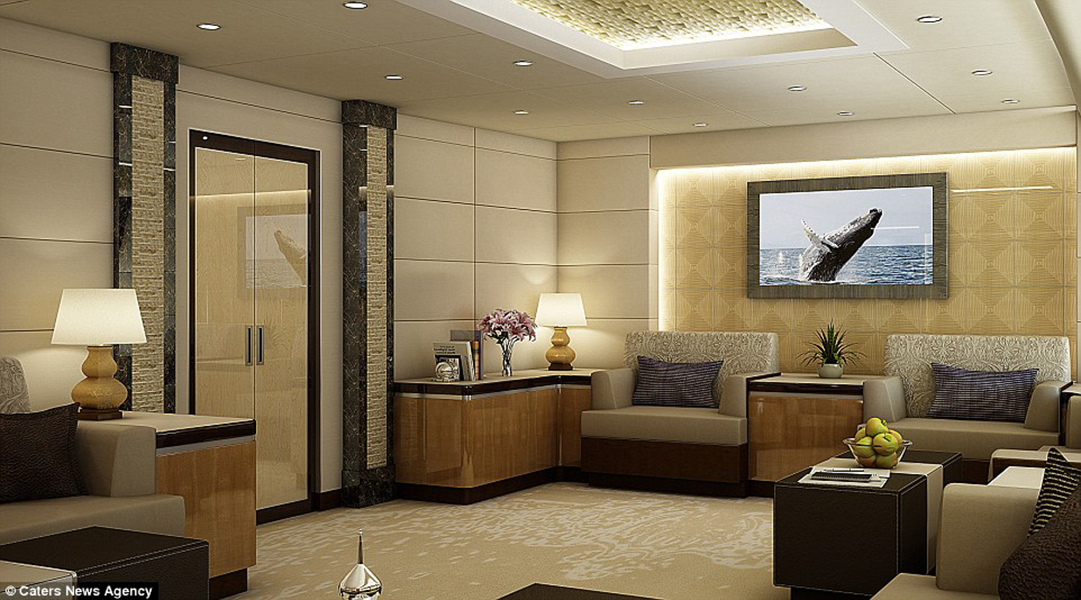 Here we have a view of the office. The office is where our billionaire friend comes to check on the financial markets, see what’s breaking in the news and to play Candy Crush Saga on his iPad. 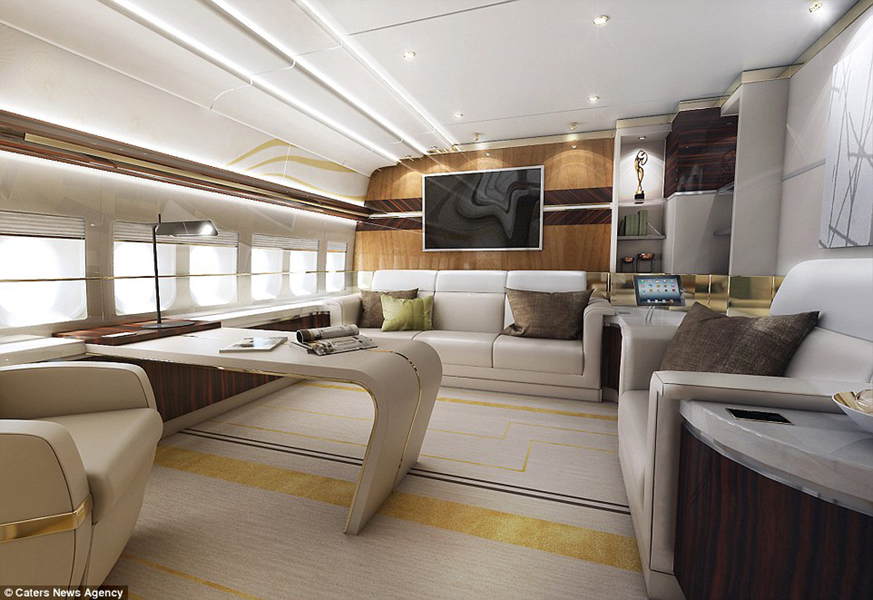 Back in the stateroom, the billionaire relaxes by watching a TV show about tigers. 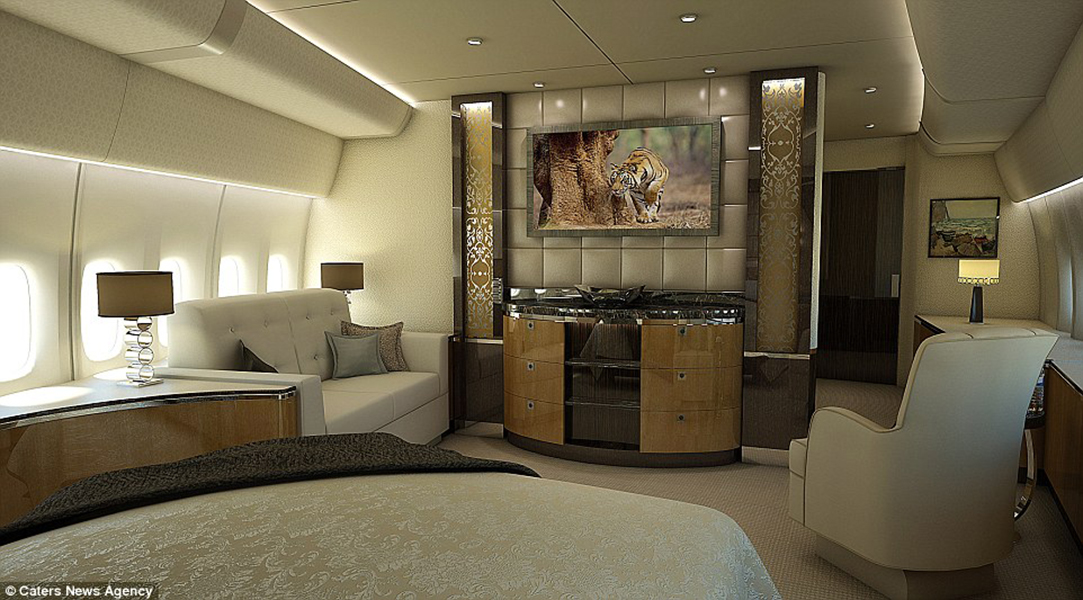 While his associates remain in the conference room, enjoying a show about migrating birds … 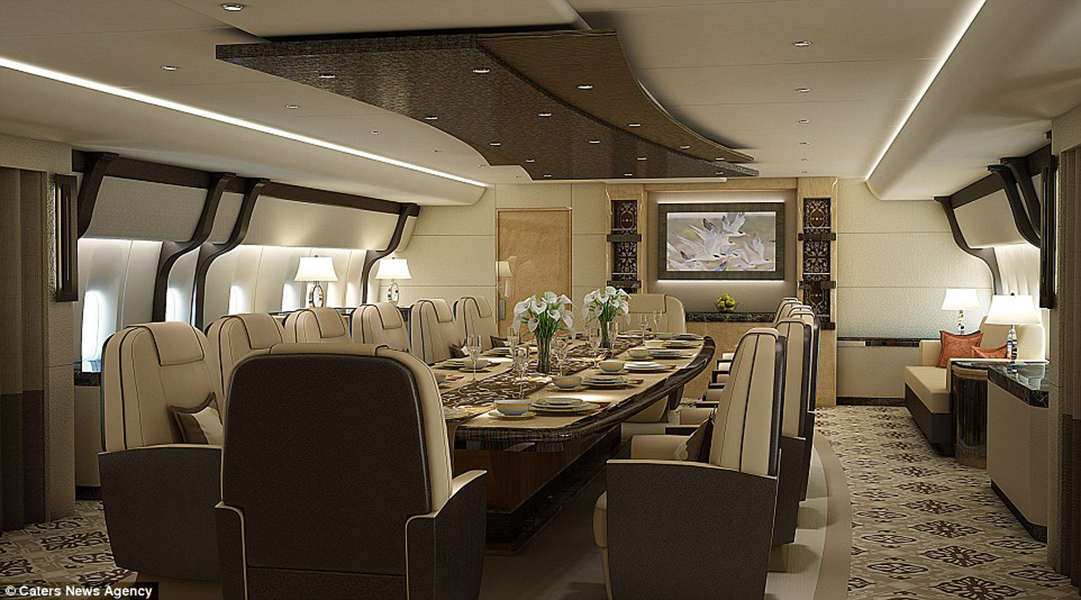 You’re never short of somewhere to sit down on this jet. We’re guessing half the refurbishment money was blown on sofas. 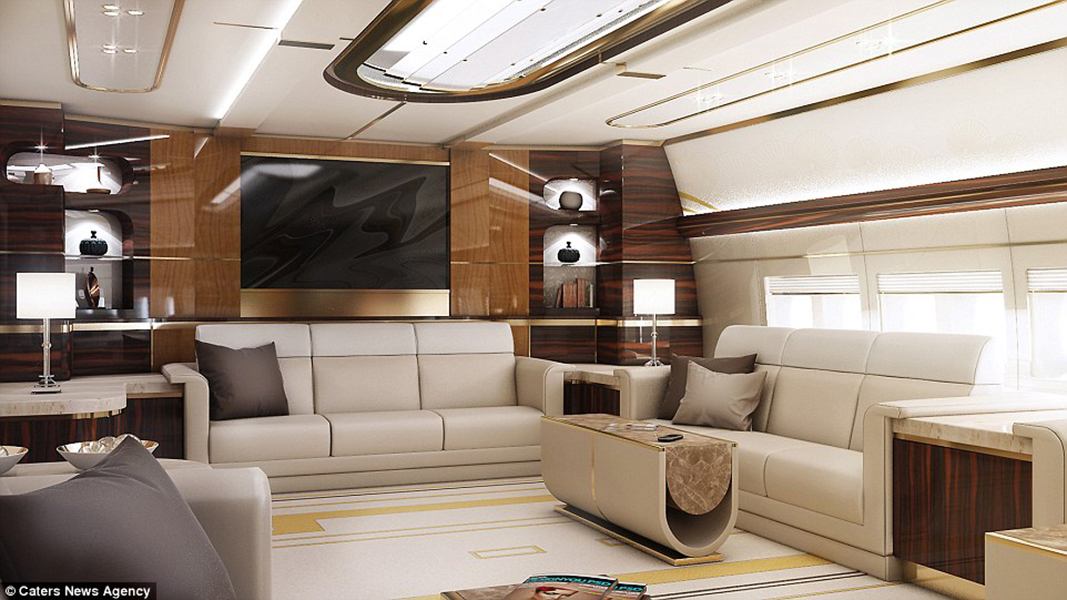 There are even seats in the corridors. 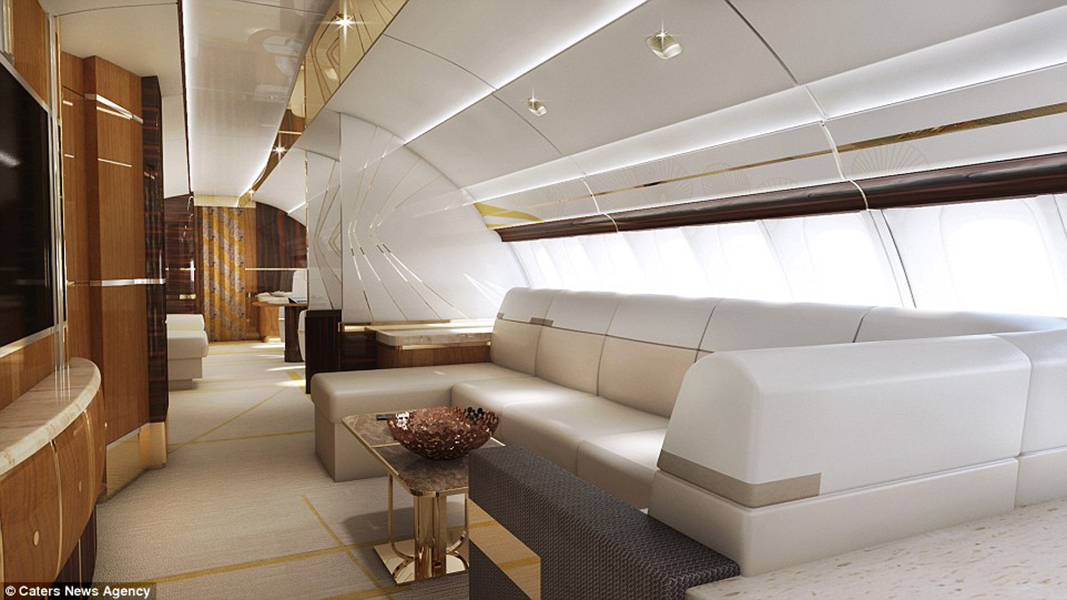 In the bedroom, there’s just about room to squeeze in another iPad. 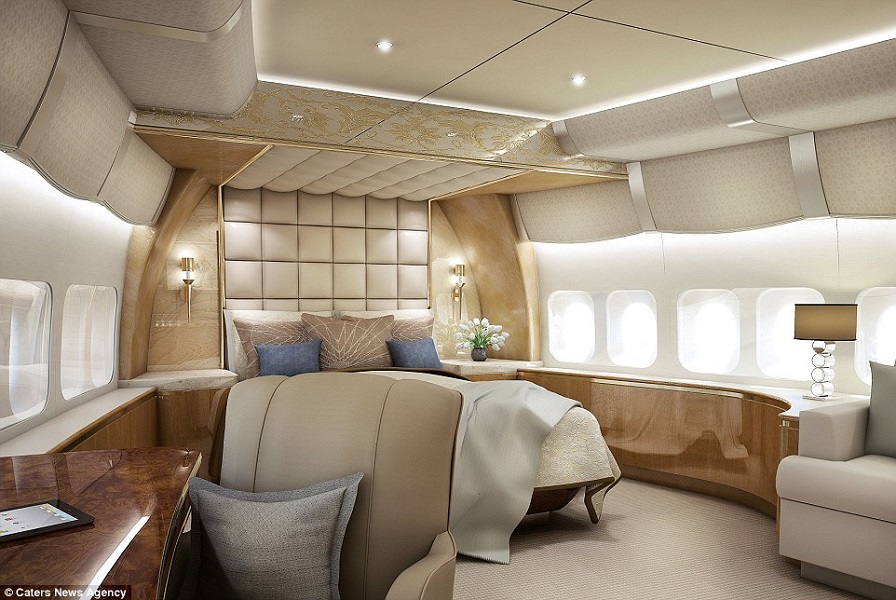 And finally we’re back where it all began in the lounge. We hope you’ve enjoyed flying BillionAIR. Don’t forget to tell your billionaire friends! 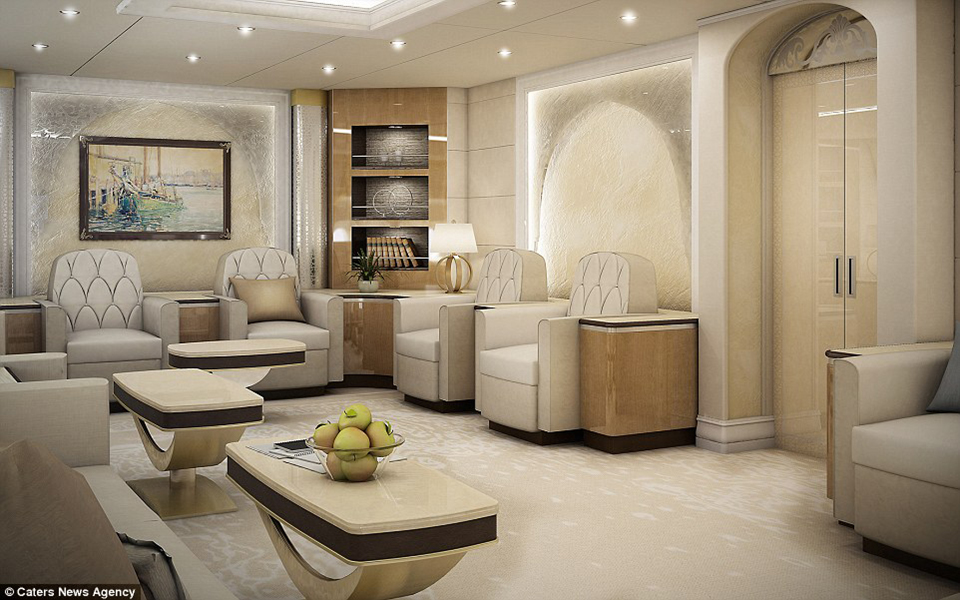