It looks like the holy grail of Ghostbusters deleted scenes has finally been unearthed. The official Facebook page of Ghost Corps, a subsidiary of Columbia owned by Dan Aykroyd and Ivan Reitman, made an announcement on Thursday that multiple reels of deleted footage from the original film had been found in a storage unit belonging to Reitman. One of the tapes is labelled ‘Fort Detmerring,’ which should be familiar to fans of the seminal 1984 film.

The deleted scene, which has never been released, sees Aykroyd’s character, Ray Stantz, having a sexual encounter with a ghost, whilst dressed in period attire. 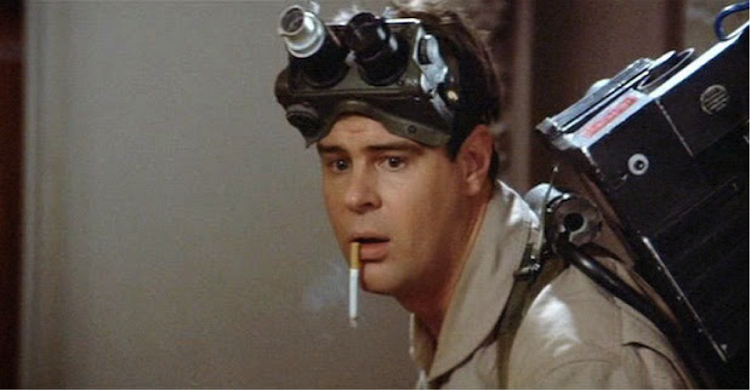 According to Wikipedia, this is how the ‘Fort Demerring’ scene plays out:

“Ray Stantz is in the Fort Detmerring Single Officers’ Quarters, a painstakingly restored period room with a four poster bed, writing table and wardrobe hung with uniforms. Ray tries on an officer’s uniform and models in front of a full-length mirror, striking a few heroic poses. He then tests out the bed and quickly falls asleep from exhaustion. A uniform sleeve moves slightly. A sabre in its sheath begins to tap lightly against the open doorsash. A phosphorescent light streaked out in between gaps in the clothing, casting patterns over the room. Ray’s P.K.E. Meter goes off. Stantz rolled over. From inside the attire, a pink mist rose up and took on a human form. It hovered above Ray and seems to look over Ray. Ray, still asleep, rolled onto his back. The mist slithered through the curtains of the bed post and slowly descended. The ghost appears to be a beautiful young woman. She is face to face with Ray then moves down past his waist. Ray wakes up and props himself up. The ghost vanished. Ray’s belt is undone and his zipper slowly opened. Ray’s confusion turns to pleasure. Meanwhile, Winston Zeddemore is walking in the corridor outside smoking a cigarette. He heard voices and went up to the door. Winston asked Ray if everything was okay. Ray quickly yells, “Later, Man!!” Winston shrugged and slunk away.”

It's time for another #TBT vault find! These reels came from a box in Ivan's personal storage and we're pretty excited to have uncovered some unreleased scenes! #Ghostbusters

Two other tapes were also uncovered, one called Honeymooners, and another with the vague title of Bill Murray. The question now is, will Ghost Corps release them? We hope so!