A 22-year-old man from South Carolina is lying critically ill in a hospital bed today after he was beaten black and blue and shot in the leg in a failed robbery attempt on the First United Methodists Church in Greenville. Manuel Cruz thought he’d picked a soft target when he picked on the church. After all, what are the chances you’ll come up against strong opposition in a place of worship? Cruz certainly didn’t think so, but he was in for a nasty shock in the shape of 87-year-old church volunteer secretary, Myrdal Smith.

“I may be 87, but I’m no p*ssy, I’m the real deal!” Smith told reporters. “I was sitting at the desk when this young man came in asking me for directions to McDonald’s. I said, ‘What do I look like? A road-map?’ Then this little thug had the nerve to tell me to give him all my money! That’s when the fun began.”

Myrdal told Cruz that he could have the church’s petty cash, but as it was on a top shelf behind her desk, he would have to reach for it himself as she was far too short. The moment Cruz turned his back on the feisty octogenarian, she grabbed hold of a cast-iron skillet from Wednesday night’s church pot-luck and smacked him over the back of the head. 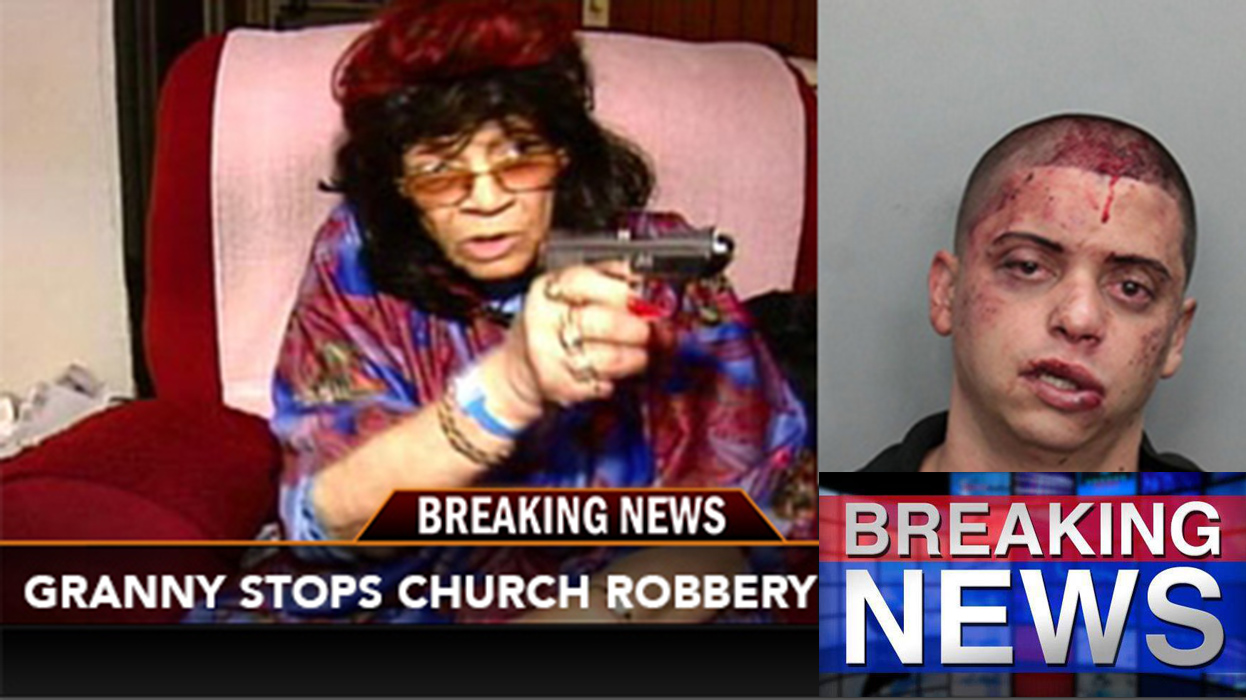 “As soon as he turned around I grab that pan with two hands and swung it as hard as I could,” Smith laughed. “He fell to the ground and I hit him five more times in the head and in the face. Then he tried to get up and run, so I shot him in the leg with the gun I keep under my desk. I don’t play. These kids gonna show some respect!”

Police and an ambulance were then called and when they arrived, they found Cruz lying on the floor, crying and badly injured. A paramedic attending the scene says Cruz begged him to get the ‘crazy woman’ away from him.

“That’s all this guy could say,” the paramedic said. “On our job we try to stay professional. But when we were treating him all we could do was laugh. I guess you can say he got what he deserved.”

Despite the fact Myrdal Smith discharged a firearm during the incident, police have decided not to press charges. “She did what she thought she had to do to protect herself,” an officer told reporters.