A man was forced to drive his truck on top of a car in order to protect his wife and young child from a road rage attack.

Adalberto Aponte, 53, was driving his Toyota Camry erratically around High Springs, Florida, yesterday, nearly causing several crashes. He then tailed the 18 year old victim, who was in his Ford F150 with his wife and their young baby. When both vehicles stopped at traffic lights, Aponte got out of his vehicle, approached the Ford, and began punching on its windows.

In an attempt to stop the attack, the woman falsely claimed that the pair had a gun in their vehicle. At this point, Aponte told the family, “I’ll show you a real gun” and headed back to his Toyota. Traffic in front prevented the victim from moving forward, so instead, he reversed the Ford and parked it on top of the Toyota, so that Aponte wouldn’t get the gun and cause harm to his family, Ocala Police Department said. 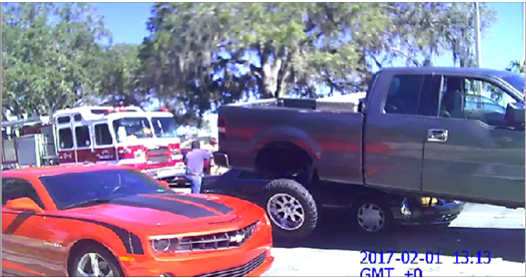 Aponte, who was arrested at the scene, was charged with burglary, battery, criminal mischief and driving with a suspended license. The 18 year old was not arrested.