Chicago police responded to a 911 call to find a crazed, young woman, Jenny Peak, 33, beating herself in the head with a crowbar. When police tried to calm Peak down, she flung the crowbar, shattering the front window of the home, and then began ramming her head into a living room wall.

Peak then started yelling “take that, p***y” while punching herself in breasts and stomach.

Officers had no choice but to hit Peak with a stungun as she would not stop harming herself.

She was determined to beat herself up, an arresting officer said. And she did. One of the worst beatings I’ve ever seen in my twenty years on the force.

Reportedly, the incident began when Peak took a $12 bet from her stepfather that she couldn’t “beat her own ass.”

I knew I could beat myself up even though I’m pretty tough, Peak told police. I wanted to really show him [stepfather] that I wasn’t afraid of myself. 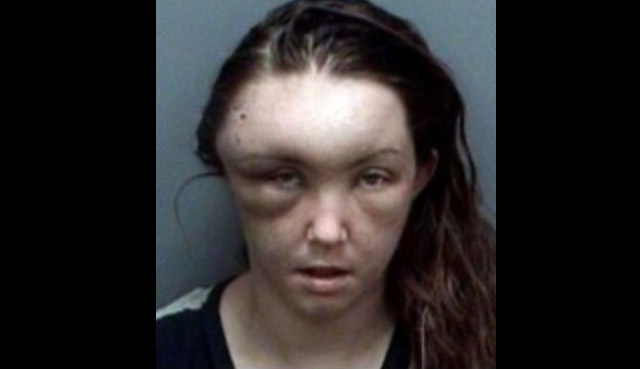 Her stepfather said he would not renege on the $12 bet, but refuses to cover the $4,000 in medical expenses Peak has so far incurred. Peak suffered multiple skull fractures and lost several teeth in the self-assault.

While she was hurting herself, the officer said. She broke a coffee table, some Chinaware and put many holes in the walls. Her stepfather has pressed charges for felony property damage.