Not many people saw Nate Diaz‘s win over Conor McGregor coming. Least of the pop star Justin Bieber. Bieber showed himself to clearly be a fan of The Notorious, after taking to social media to commiserate the Irishman’s defeat. But what he said seems to have got Nate’s back up. And, as we saw at UFC 196, he isn’t a man you want to upset…

It’s a dangerous game to play for youngster who, while not openly offensive about Diaz, has done enough to earn a fierce reply from the fighter.

After the bout, Bieber posted this video and picture to his Instagram account (which has a huge 60 MILLION followers…):

No bandwagon but Conor is a true champion, fights with style and finesse, all the respect to Nate but his style is terrible. Nate has crazy heart respect.

And it didn’t take long for word to spread that Biebs was dissing Diaz. Nate’s response? This on Facebook: 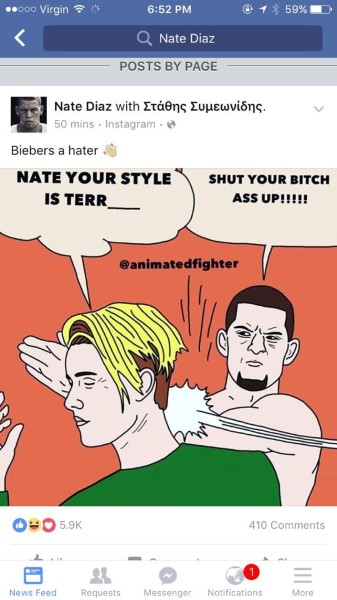 Your move, Bieber. Careful how you tread.