This is Josh McKenzie. He’s not like most fifteen year olds you’ll meet these days. Not only is he ranked number in his grade in football, but he’s also number one in his grade in wrestling too. And that number one in the whole of America, by the way. Oh, and on top of all that, Josh has been ‘genetically bred’ to be a sports superstar … and it’s all been his decision. So no, he ain’t like your typical fifteen year old. Let us explain:

Josh started training to be a superstar at the age of just five years old under the careful tutelage of his uncle, Bill Green. At first Bill thought it would just be a bit of fun for Josh to train with him, but he soon realized the boy had an unusual level of discipline in one so young. It wasn’t long before that bit of fun had turned into tough physical training, so much so that by the age of six, Josh (pictured on the right) looked like this: 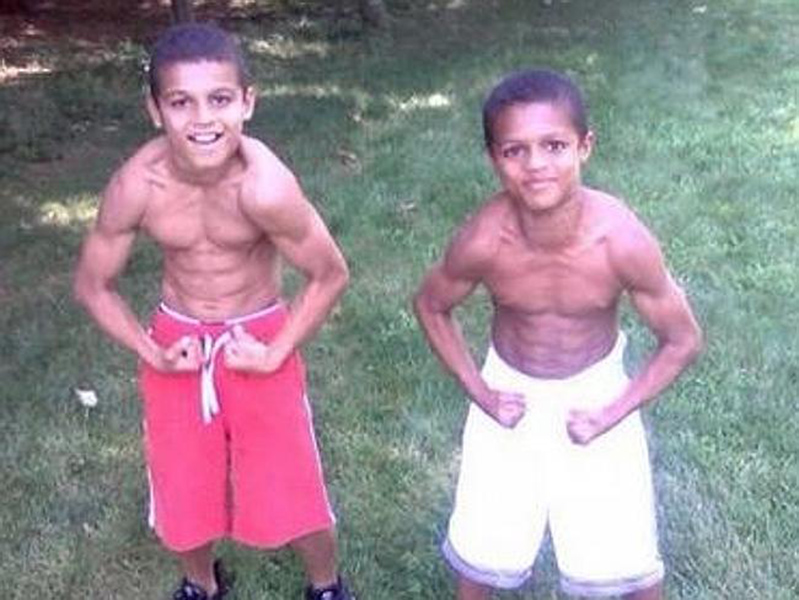 Throughout his development, his family has been eagerly encouraging him. They couldn’t believe it when he decided to repeat the eighth grade, for example, but went along with the boy’s wishes when he told them that it would be better to repeat the year so he could develop both mentally and physically. Remember – that’s an eighth grader saying he wants to repeat a whole school year, not because he didn’t get the grades (he did), but because he wanted to face the next academic year as a stronger physical specimen. Remarkable.

As the child has slowly turned from a boy into almost a man, his family has paid for ten personal trainers, coaching in him such things as weight training, nutrition, sprinting and even the psychology behind what it takes to be an elite athlete. His family estimates they’ve spent around $15,000 on his development.

Make no mistake, an elite athlete is what Josh intends to be. His ambition is to play in the NFL. He’s already had a trial with Bergen Catholic High Scool, and is now ranked number one in America. Oh, and if he doesn’t make it in the NFL? Then he plans to become an MMA fighter instead.

Something tells us this boy could easily excel in both sporting arenas. Check him out in this inspiring video. We think this won’t be the last time we hear the name Josh McKenzie.