A dad with a very particular set of skills was left little choice but to come down hard on his scruffy teenage sons recently, leaving a threatening letter for them to find. The kids had refused to clean up after themselves, especially in the kitchen. And this had enraged their pop…

Taking his inspiration from another older dad who doesn’t take any nonsense, the guy looked to ageing action hero Liam Neeson and his classic cellphone call in the first Taken movie. 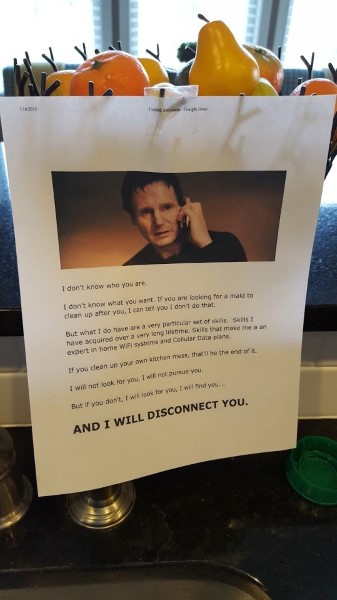 How you gonna argue with that?!

The guy posted his lett up on Reddit, along with this message:

“Actually, my kids have their sh*t together. My oldest graduated high school a semester early and then got a 30 hour a week job to save money for college. My youngest has a 3.95 GPA in all IB classes and picked up a summer job for 30 hours a week. When it comes to the “big rocks” of life, they are squared away. They’re just f*cking slobs.”

Here’s the original scene from Taken in full. Now do the damn dishes!