An Alabama cop has been fired for posting a ‘racist meme’ on Facebook. Joel Husk was dismissed after two years of service after he was reported for sharing the derogatory post that racially targets the First Lady, Michelle Obama.

Husk made the mistake of sharing a meme on his Facebook page that shows pictures of Melania Trump next to the words, ‘Fluent in Slovenian, English, French,Serbian and German’ and under that a photograph of Michelle Obama, along with the words ‘Fluent in Ghetto.’ 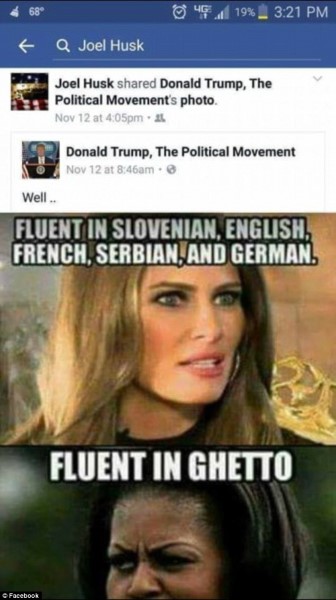 Talladega City Manager Patrick Bryant said this about Husk’s dismissal: ‘We will not tolerate that kind of conduct by any employees. We take very seriously our responsibility to treat everyone equally and equitably. We have to make sure we take steps for the community to trust us.’

‘Statements deemed to be biased or racially insensitive or derogatory can affect the community’s trust in the police department and, when that happens, we have to take action to correct it. As public employees, and especially law enforcement officers, we have a standard of excellence to uphold.’