An elderly couple from the Upper West side of New York City were busted by the Drugs Enforcement Agency this week after being found to be selling pills illegally to patients. The opiates had been flowing from their office since 2009, with prosecutors claiming that Dr. Rogelio Lucas, 77, and wife and office manager Lydia, 80, peddled Oxycodone worth over $77m!

Charged with 37 counts of illegally selling a controlled substance by the DEA, the Lucas’ used to sell prescriptions for the painkillers for $120 a go. The couple made well over $500,000 in the past six years and it’s thought that several local drugs rings got their supplies from the old couple. 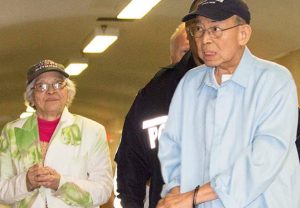 Bridget Brennan, the New York’s special narcotics prosecutor summed up the case like this:

“Dr. Lucas is charged with being one of the city’s most prolific illegal prescribers of the black market’s favorite pill — 30 mg. Oxycodone,” Brennan said. “Instead of healing, doctors who routinely sign orders for unneeded narcotic drugs endanger the health and welfare of the public. Corrupt doctors who exchange prescriptions for cash have stoked the epidemic of addiction gripping our region.”

The couple are arguing the case, having pleaded not guilty. They were held on a whopping $500,000 bail.

“They have nine children. They have been married for 55 1/2 years. They’re not going anywhere,” the two’s lawyer Liam Malanaphy said during the court case.

Manhattan Supreme Court Justice Bonnie Wittner didn’t agree, though. “This is a very serious case,” Wittner said of the couple’s crimes. “He abused his trust as a physician. I mean, it’s the most serious thing a doctor can do. He wrote prescriptions without treating patients.”

It’s always the quiet ones, huh?