In an unusual move to get round a driving ban, Texas State University student Tara Monroe has taken to driving a second-hand, bright pink, electric Barbie Jeep she bought from the Internet. Monroe, a twenty year old engineering student, was stopped by state troopers driving on the highway after she attended a Waka Flocka Flame concert. When asked to take a breathalyzer test, Monroe refused and her licence was subsequently revoked on a charge of DWI.

Without a car and apparently unable to entertain the idea of using her legs to get around, the student fired up eBay and soon found what she was looking for – a bright pink Barbie Jeep that was being advertised for $60. When Monroe went to collect the Jeep, the owner asked where the little one was who would be driving it. Monroe replied she was the little one, and drove the Jeep away.

Since then she’s become the talking point of her campus, often seen driving her toy Jeep around the area as she goes from lecture to lecture, as you can see from the images above. Her friends often follow her around, as Monroe herself explains:.

“It goes pretty fast when it’s just me, so I usually make them walk behind me like parents taking their kid out to play. I’m just happy everyone thinks this is so hilarious.” 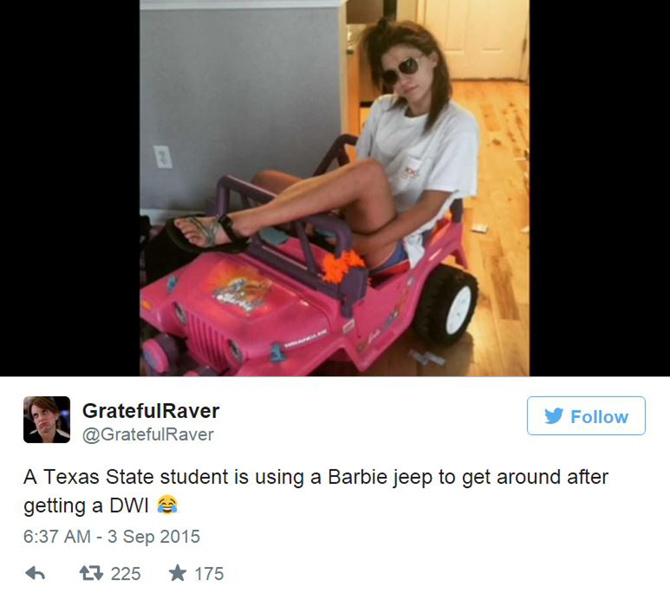 Yeah, hilarious. We don’t know about you, but the word ‘attention seeker’ springs to mind.