Online dating is the way forward… apparently. Do people ever meet each other organically anymore? Finding a good old time with a random person has never been easier than it is today. Take the dating apps Tinder or Plenty of Fish for example – we are literally supposed to be meeting people based mainly on their appearance. If that doesn’t encourage amorous behavior, then I don’t know what does.

Moving along – a guy named Kyle Barber, a 26-year-old from Newcastle, UK, jumped on Plenty of Fish and started chatting to a woman who was up for some fun with him and a third participant. She asked him to find another dude who was willing and to come on over. 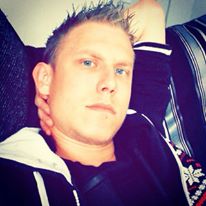 Kyle, unable to find a third person, texted the woman to let her know. She replied that her cousin was over and that, if she was drunk enough, she’d be interested in joining the pair. So… off Kyle went in a taxi after buying a litre of vodka.

“I walk into this flat and immediately smell cat poop. It reeks of poop. I close the door and walk up stairs to the living room. It was effing disgusting. The room was covered in rubbish, there were plates down the side of the sofa, flys flying about like they were auditioning for The Ring 3 and a single bed at the end of the room that looked like it was used to give birth on.”

“I pretend like this stuff doesn’t affect me and I make a joke and we have a little laugh. I ask them to sort some drinks out while I go to the toilet but before I left, I notice one of the girls grab a cup from underneath the sofa to pour the vodka in.” 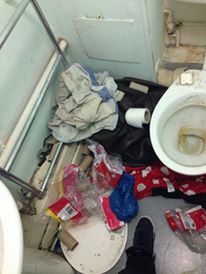 Needless to say, Kyle did not return and blocked the girl’s number. He now warns others, “”Careful who you meet on dating apps.”