Mike Pothoff runs a business and had cause for some quick casual labor. He wanted to help some people out at the same time, so decided to see if any of the homeless guys panhandling by his local McDonald’s wanted any work. But when he asked, they all said ‘no’. He was shocked. And angry. He decided to do something about it…

So Mike decided to take the day off work himself. If they weren’t working, he wasn’t working. He stood next to them with a sign which read, “Offered these guys a job and they said no. Don’t give them money.”

The picture originally went up on Facebook. The posts, written by Mike’s nephew Michael said, ‘My Uncle Mike offered these guys a job said he was busy right now could use the help they said no so he did this !! Wow don’t give these guys any money. Share Share Share!!’ 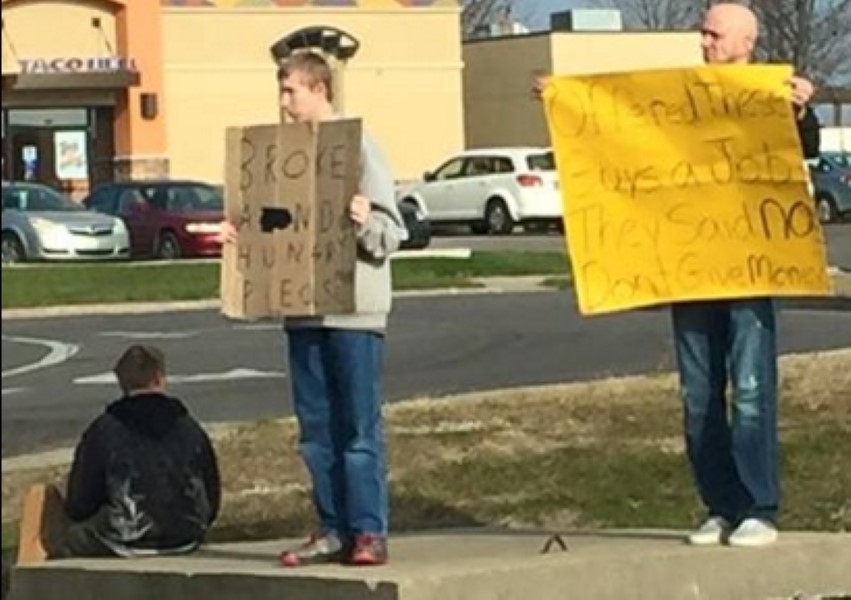 Pothoff has come under fire for his controversial sign, but defends himself, saying this:

“Now there’s people saying really bad things about me, like I was offering them sexual sh*t, so now, I just want people to hear exactly what I did… Here’s my thing, I work hard for my money… The younger kid, the one guy said, ‘I’m a sex offender,’ I said, ‘That’s alright, come on down, I’ll hire ya, I’ll give you a chance,’ so he said, ‘Well, I’m also on SSI,’ so I said ‘Okay, let’s cancel that and let’s go to work.”

What do you think? Was he right to become annoyed and indignant at the lack of work ethic? Or is it not his place to dictate the lives of others and ‘shame’ them in this way…?